The spiritual motherhood for priests

The call to be a spiritual mother for the priests is relatively unknown nor understood, despite its fundamental importance. As a result, it is rarely practiced. This hidden calling, a source of spiritual strength.

Pope John Paul II was so convinced of the importance of this calling that he founded a closing monastery in the Vatican where the sisters would pray for the intentions of the Holy Father.

“What and who I have become, I thank my mother!”
Saint Augustine

In his meeting with young religious on September 17, 2015, the Pope said about religious –

Every woman can be a mother for priests, regardless of her age or social status. This type of motherhood is not only for mothers of families, but it is just as good for an unmarried girl, a widow, or for someone who is sick. It is especially important for missionaries and religious sisters who have given their lives entirely to God for the sanctification of humanity. Pope John Paul II even thanked a child for her maternal help: “I am very grateful to Blessed Jacintha of Fatima for the sacrifices and prayers she offered for the Holy Father, whom she saw so much suffering” (May 13, 2000).

Every priest has a mother from whom he was born and who is often also a spiritual mother for her children. An example: Giuseppe Sarto, who became Pope Pius X, visited his seventy-year-old mother after he was ordained a bishop. She kissed her son’s ring and then thoughtfully pointed to her own simple silver wedding ring. She said, “Yes, Peppo, you would not wear that ring if I had not worn mine first.” Pope Pius X rightly confirms his experience that “every calling to the priesthood comes from the heart of God, but continues the heart of a mother! ”

You can see this in particular in the life of Saint Monica. Augustine, who lost his faith at the age of nineteen while studying in Carthage, later wrote about his mother in his famous “Confessiones”: “God tore my soul from the depths of darkness because she held her hands up to Him and more tears shed for me, then a mother would shed at the physical death of her son. For nine years I roamed in the mud of that deep well and in the darkness of falsehood. But that pious, chaste, simple widow, who lived entirely according to your will, persisted. For hours she mourned over me and prayed to you for me. “After his conversion, Augustine gratefully said:” My holy mother, your servant, has never let me go. She brought me to the flesh so that I could be born in this temporary light, and in her heart so that I could be born for eternal life. What and who I have become, I thank my mother. ”

Saint Augustine always wanted his mother to be present during his philosophical conversations. She then listened attentively and sometimes intervened so delicately that the scholars were surprised at her inspiring answers to complex issues. It should not surprise us that Saint Augustine called himself her “disciple of philosophy”!

If you feel called to be a spiritual motherhood, you can contact Mother Priorin or Sister Bernarda. Mail or call us. 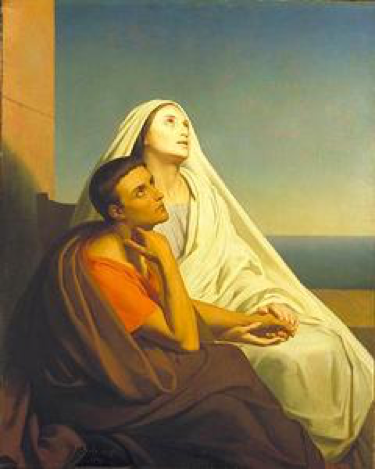