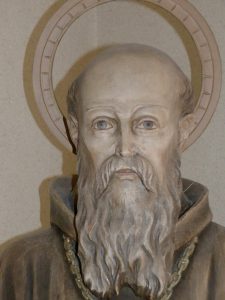 Benedict (c. 480 – 547) was born in Nursia, the current Italian Norcia near Perugia. He joined a group of hermits at the age of fourteen. This group eventually ended up in Subiaco, east of Rome, where the monastery of Santo Speco came into existence. He was elected superior in Vicovaro, but he was so strict that the monks became anxious and even tried to kill him by poisoning his cup. But when Benedict blessed it, the cup broke. That is why he is often depicted in art with a cup in his hand from which a snake emerges. To avoid such conflicts in the future, he founded his own community on Monte Cassino.

His death day is celebrated on March 21 and the transfer of his relics on July 11. He is invoked as patriarch of the monks of the west and as a mirror of obedience, poverty and purity.

The enormous influence of Benedictus is mainly due to his monastic rule, the Regula Benedicti. Such rules already existed, such as the anonymous Regula Magistri, but almost all of them were perceived as being too strict or unbalanced, like later that of Saint Columban.

Benedict’s rule is a balanced rhythm of prayer, work, rest. He sought to lay down a rule that was neither harsh nor burdensome. The order of the Benedictines rapidly spread throughout Europe. This happened both by introducing the rule in already existing monasteries and by founding new monasteries. Benedict has also become one of the patron saints in Europe. His biography is included in the ‘Dialogues of Pope Gregory the Great’.

Saint Scholastica was a twin sister of Benedict.

If you want to know more about the Rule of St. Benedict, you can click the following link for an explanation .

Benedict’s message for our time

The Europe of Benedict, in its state of moral and political dissolution, was very similar to the Europe of our days. The Roman empire was near its demise. The incorporated peoples sought their independence. Something we have also experienced in our days.

This stabilitas binds the monk to the monastery of his entry. The bond with a certain community is the concrete realization of our monastic life. The stabilitas that Benedict asks of his monks and nuns is a constancy in Christ. Because without Christ it is not possible to live a lifetime in the same community with completely different people.