Short life description; the founder of the Benedictines of the Perpetual Adoration of the Holy Sacrament

Catherine de Bar was born on December 31, 1614 in St. Dié in Lorraine. At the age of 17, her father gave her permission to enter the Annunciaten in Bruyères. She already became mother-superior there when she was 19 years old. When in 1635, during the Thirty Years’ War, the troops advanced, the nuns fled to Commercy and then ended up with the Benedictines of Rambervillers. There Catherine van de Annunciaten passed on to the Benedictines. On July 2, 1639 she became a novice and on July 11, 1640 she made her vows. On that occasion she took the monastic name Mectilde of the Holy Sacrament.

Again fleeing war violence, she arrived in Paris in 1651. Here she founded the Institute of Perpetual Adoration of the Holy Sacrament on March 25, 1653.

The founding grace: “Nothing”

Mother Mectilde was fascinated by Jesus, the Lamb of God who takes away the sins of the world. She sees the whole “drama” of our redemption in the light of this secret. She is particularly attracted by the Son of Man delivered into the hands of sinners (Mark 14, 41). She feels how Jesus’ tradition continues in history. Because in every sinner, Jesus empties himself again …

The secret of Jesus’ tradition is also the secret of the Father. It is precisely in his total emptiness, his ‘nakedness’, that Jesus draws the love of the Father to himself. In this way Mother Mectilde shows us that the resurrection already begins in and with the death of Jesus.

“Jesus empties Himself every day in the most holy Sacrament to confess and glorify the infinite Being of his Father” [1] .

[1] “True Spirit”, 1.1. The True Spirit of the Sisters of Everlasting Worship of the Most Holy Sacrament is Mother Mectilde’s most important scripture in which she explains the spirituality of her religious Institute, available from the Benedictines of the Sacred Sacrament in Nazareth Priory in Tegelen.

The topicality of Mother Mectilde: a spirituality for a culture of death

Mother Mectilde has given the Church a new eucharistic, existential way. That is her special significance for our time. Her living Eucharistic faith has given her an experience of wisdom with regard to Jesus’ sacrifice in the Eucharist. She teaches us to actively participate in the Eucharist. The liturgical celebration of the Eucharist wants to lead to the “Eucharist of Life”, to a life of responsiveness and self-giving. This road is not known, says Mother Matilda … “However, one must die to everything, so God alone is !”

Mother Mectilde has given the Church a new eucharistic path. That is her special significance for our time. Her living Eucharistic faith has given her an experience of wisdom with regard to Jesus’ sacrifice in the Eucharist. Her spiritual creative power then consisted of allowing her to show believers a mystical and ascetic path. But that way is difficult and unknown. From her experience as a spiritual guide, she notes: “I find many souls who go to God; but I find few in the deep way of death and the emptying. This route is unknown. And yet we must die to everything, so God alone! ” [2] .

Although it is a path of ‘everything and nothing’, it is nevertheless passable and made for the life of every day: Because we let our ‘death moments’ take up in the fire of the love with which Jesus committed himself to the Father, we become too providing the divine power of the resurrection in the midst of death. Thus, in the midst of the difficulties of ordinary existence, we may live again and again from His own life.

The death of Mr. Mectilde

Six weeks before her death, she warned her sisters that she would only be with them for a short time.

On February 26, 1698, the feast day of St. Mectilde, she gave the community a one-hour conference as usual. All sisters loved him, despite the seriousness of the subject (about the extremes of mankind). For she spoke in a tone of joy and joy, finally reaching the goal of life: to see God beyond death. All her words were aimed at making the sisters “ready to submit to God’s decisions when the time came” for her to leave them and go to a better world, “leaving her body behind for the worms.” When one of the sisters wanted to kiss her hand, she stopped her and said to all of them:

“You would like to see your mother glorified, see her performing miracles and wonderful signs, but none of that will happen; she will become so terrible (to see) after her death that you will be more than happy to hide her and see you obliged to say that that body must be thrown into a pit as soon as possible in decomposition. ”

Despite her miserable state of health, she is in the Holy Week with the long offices. On Tuesday after Easter she goes to a statue of Our Lady in a small chapel in the garden of Rue Cassette around 4 o’clock in the afternoon. She continues to pray there for more than an hour. Around 5 o’clock a sister comes to tell her that they are looking for her everywhere, afraid that she is not well. She replied that she had to hand over the Institute and the community to Maria. Another sister who wanted to talk to her noticed that she was only busy with her imminent death and with whom she had to succeed her at the head of her Institute:

“I feel induced inwardly to prepare you to miss me so that you will submit to God’s decision and instead of wasting your time crying, you will turn to the holy Mother of God, your only superior , to receive from her hands the one she will choose to lead in her name. ”

And she added: “I must die in bitterness and destruction, that is God’s decision over me. I adore it and submit to it (…). I have to die in distress. ”

In the night from Wednesday to Thursday, she got up as usual to do her 3 hours of silent prayer and pray her office. She had to throw up on Thursday morning, but she still prayed her office to the Nonen, but she could not come down to the chapel for the Mass at 11 am. Yet she prayed with it thanks to an opening in the wall that gave a view of the choir. At the lifting, she fainted and could not kneel. The sisters who came to her found her so weak that they thought her last hour had come, and they asked for a priest to give her the final sacraments.

She (MM) united with “very extraordinary godliness” with the prayers of the dying. She asked the community for forgiveness for the bad examples she had given. Sitting on the straw bag that served her as a bed, she prayed the Confiteor in perfect modesty, with her hands together.

On Friday she seemed to make it a little better. Saturday, still in bed, she set up to receive a benefactor from the monastery who wanted to see her. She said to her: “Yes, ma’am, I am going to my God”. After that visit her condition worsened. She had her confessor warned, Father Paulinus, the former provincial of the Penitents of Nazareth of the third order of Saint Francis. He arrived on Sunday at midnight. He heard her confession and gave her the Eucharist that she received “in the spirit of reparation.” Her thanksgiving lasted half an hour and she remained kneeling all the time despite her great tiredness. Around 6 o’clock in the morning, Father Paulinus asked, who was still there, what she was thinking about. She answered: “I adore and submit.”

No more. Her soul, empty of all earthly things, was only full of God. Then the priest asked her to bless her community and to recommend it to Our Lord. She did that and she added, speaking about her sisters: “I have them all in mind. Tell them, Father, that they must throw themselves with skin and hair into the arms of the Blessed Virgin. I would still like to tell them a lot, but I can’t. ”
The father answered her:” God knows, that’s enough. ”

From that moment until her last breath, she clutched her crucifix in cock hands and on her heart, and glanced with love at the statue of the Blessed Virgin standing at her foot while the community was praying around her. She felt weaker around noon, she let her pulse feel to know if her last hour had really come, but they told her it wasn’t. Her eyes looked “no less beautiful and less soft than usual”. From time to time she watched her heartbroken community of which several sisters were in tears, praying to God to give them the grace they needed to accept the goodbyes. Around 2 o’clock in the afternoon she sat up in bed, took a small cushion to rest her aching head on it,

It was Sunday Quasimodo, April 6, 1698. She was 83 years, three months and six days. Her limbs remained as smooth as when she was alive. The color remained on her cheeks.

Forty-eight hours after the death, they wanted to put her body in the coast. But the overwhelming will of the people to be able to continue to see its body led the monks of Saint-Germain to first offer the funeral service. Only then was the still open chest of the church choir transferred to the chapel of Saint Joseph, where she was to be buried. He was covered with lead to ensure better preservation. A protective cloth was placed on her face, but people who had come to attend the ceremony insisted that it be temporarily removed so that they could see for the last time the person whose image they wanted to keep engraved in their memory. Expressions of sorrow and worship, and testimonies full of praise continued to flow. The Benedictines preceded, then, the prayers of the funeral in the proper sense.

The third day after Mother Mectilde’s death, a second funeral service was held in the rough Cassette by the Franciscans, who had kept a friendship with our founder from her years as Annonciade, of whom they were the ordinary ecclesiastical superiors. On the seventh day, so did the premonstratensers, who openly wanted to show their inviolable association with our Institute: they came to sing the Mass for the deceased with their entire community. On the 30th day there was a solemn celebration to which the sisters had invited many people; they sang that mass themselves and their rector dedicated Mass and had the most beautiful black parameters of their sacristy.

Three days later, the 10th of April, the sisters chose a priorin to succeed M. Mectilde. The elected Mother Marie-Anne of the Holy Sacrament (Anne Loyseau, 1623-1699), had done a profession on 5 February 1662 in the Rue Cassette. She was the one from whom M. Mectilde had informed some people with good judgment that she would like her to be chosen for this. The grave of the founder in the Saint Joseph chapel of the church, which was later destroyed, was not found in the excavations that were done in 1954-1955 at the site of the former monastery, where now the numbers 10-12 and 14 from Rue Cassette. 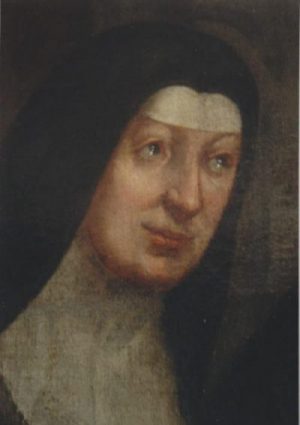